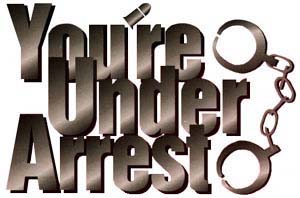 A Noble man is jailed on numerous complaints including possession of a stolen vehicle after allegedly stealing a pickup in the Bethel Acres area and running it off the road miles away.

Pottawatomie County Sheriff’s Capt. Travis Palmer said deputies received information late Friday night about a 2007 Dodge pickup being stolen while its driver was in a store at SH 102 and Hardesty Road.

The owner reported he had firearms in that truck, according to scanner reports, so deputies and law enforcement officers were advised to be on the lookout for the truck as a search began.

Deputy Ray Ingram, who was on his way to a call in the southern part of the county, was southbound on SH 102 about six miles south of SH 9 when he encountered a man walking in that area, Palmer said. The man appeared injured.

Upon further check, the man, later identified at Stephen Anderson, 49, had two loaded pistols in his pocket, Palmer said.   A pickup that turned out to be the stolen pickup that authorities were searching for was found a short distance up the road, and there was blood in that vehicle, Palmer said, which was consistent to Anderson’s injuries.  Palmer said the truck was backed into a ditch, so they believe Anderson was driving and lost control of the pickup.

Deputy Mike Carnell responded to take fingerprints from the truck, and deputy Joe McGirt also worked the scene. The owner of the stolen truck confirmed the weapons found on Anderson were from his pickup, the investigator said.

Anderson was booked into the Pottawatomie County Public Safety Center on complaints of public intoxication, carrying a concealed weapon, possession of stolen property/vehicle and possession of a firearm after former conviction.  Anderson remained jailed Tuesday on $12,000 bond. His next court appearance is scheduled March 16.  No formal charges have been filed, but the case will be turned over to the district attorney’s office.

We need your help: Missing a pig?